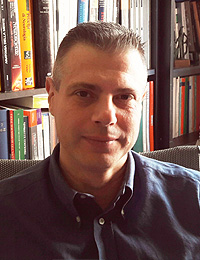 Director and Founder of Omicron Beta.

Former lecturer at CERDO (Centre pour l’Etude, la Recherche et la Diffusion Osteopathiques).
Lecturer at ICOMM (International College of Osteopathic Manual Medicine) since 2018.
Private consultant osteopath since 2003. After the degree, he fully dedicated himself to clinical practice and teaching, first as assistant and later as lecturer.
Awarded the French professional qualification from ATMAN Osteopathic Campus (France).
Enrolls at the University of Tuscia (Viterbo), Department of Biology to deepen his knowledge in 2015.
Has conducted studies on the concept of Tensegrity and cellular mechanotransduction realizing along his path that Osteopathy holds great potential in the cure of certain illnesses but lacks basic explanations for the mechanisms behind it.

In 2019 founds Omicron Beta, an association with the purpose of conducting research, tracing Osteopathy back to the original idea of its founder A. T. Still (cure of illnesses) and thus give it a place of honor among the official sciences.